← Conversations with Books, Part 1
TV Shows That Should Be on Netflix Instant →

Here’s more of the imagined conversations between the books on my new bookshelves. See Part 1 here. 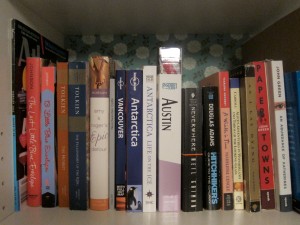 The road trip books are crowding the top shelf and trying to ignore my scrapbook from study abroad at Oxford. They’re like, “Look, unless this journey of yours is a metaphor for finding yourself, we’re not interested.”  The Murry kids from A Wrinkle in Time are sitting next to Hitchhiker’s Guide to the Galaxy, and I’m sure they’re comparing notes to see if they met any of the same people.  Richard Mayhew from Neverwhere is eavesdropping and trying to get up the nerve to jump in. I put both of John Green’s road trip books next to As I Lay Dying because I figure those smartie pants kids will feel smug about sitting next to William Faulkner. Also, Alaska and Margo can get together and form the “John Green Dream Girls” club.  I’ve helpfully supplied Amy and Roger with a handful of guidebooks, though  Antarctica would be a long drive for them.  Finally, the Tolkien hobbitses are feeling bewildered on their perch next to manic Maureen Johnson and her 13 Little Blue Envelopes series.   She’s loving it, of course, and she’s asking many inappropriate questions about Sauron. 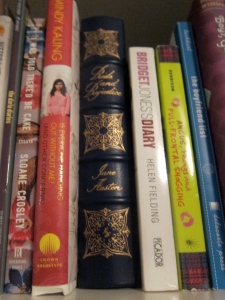 Elsewhere, Mindy Kaling is dropping bon mots to an impressed Bridget Jones and a slightly confused Elizabeth Bennet.  Bridge is proposing cocktails, Mindy is proposing cocktails and crazy manicures, Elizabeth is finding modern English much too familiar, and Georgia Nicolson is scheming to swipe some booze and trying to pick up tips from Ms Jones.  Mindy tries out her best fake British accent, and the other three dissolve in laughs. Ruby Oliver from The Boy List  is craning her head around the others to exchange wry looks with Sloane Crosley and Daria. 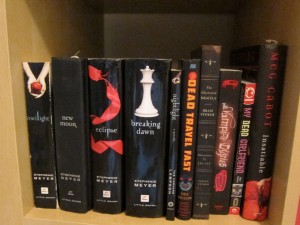 Ah, the dreaded Vampires and The Women Who Love Them shelf. Bella takes up a lot of room here (of course she does), but there’s room for a kind of support group moderated by the author Dead Travel Fast.  He’s like, “You guys know these are creatures who actually want to kill you, right?” And Elena of The Vampire Diaries is like, “Yeah, but have you seen them? Super good looking.” Bella high fives her and makes some comments about sparkling.  At this point, Vlad Dracula turns his head and clears his throat meaningful while pointing to his gross and sparkle-free  face and Meena Harper from Insatiable makes a gagging sound.   Finney of My Dead Girlfriend scratches his head and says, “So, none of you are dating ghosts? Why am I here again?”  And that’s when I sheepishly admit that he just fit into the space really nicely.

Next time:  A date night for some YA couples and the children of the Gods have brunch.

← Conversations with Books, Part 1
TV Shows That Should Be on Netflix Instant →