A Mental To Do List for the Zombie Apocalypse

A few years ago, I read World War Z by Max Brooks and it changed my life.  At that point I realized the very real possibility of a Zombpocalypse thanks to the author’s documentary story telling. Starting from patient zero and tracing the path of the virus over the oceans and then the government reactions and the military states that arise– it just sounds so possible! It’s one of those books that makes me go all crazy-eyed when I talk about it and try to convince people that they should read it and get on board. Since then, I’ve been working on a mental checklist of how I should prepare… just in case.

In the wake of the recent rash of cannibalistic attacks in the US, the CDC actually released a statement last week reminding us that zombies aren’t real. I love this so much.  This is like JK Rowling having to release a statement to remind us that Harry Potter is a work of fiction because so many people are getting concussions from trying to run through platform walls at King’s Cross Station. (JK Rowling: Please never release this statement. A part of me will die.) My logical adult side says that a zombie outbreak could never happen, but my imaginative more childlike side is shouting, “OH YES IT COULD.”  I indulge the childlike side with my list.

Here is an excerpt

–  Learn the martial arts. It doesn’t matter which one. Whichever one allows me to kick off someone’s head.

This is my friend and she’s going to survive. I want to be on her team.

–  Buy a bike. My car will run out of gas while fleeing the walking dead, but I can power the bike myself.

–  Make friends with someone who has a sword.  This person should live nearby so I don’t have to go long without access to a sword. No need for actual sword in home as I will definitely hurt myself with it if left to my own devices.

–  Study map for best escape route from city.  Figure out most safe rendezvous point and communicate to friends.  Possible site: Family farm in south Georgia?
–  Subpoint: Convince friends they should meet me. Convince friends will be asset rather than liability.
– Subpoint: I mean, I should leave the city, right? The CDC is here, but it’s not like they’re going to let me in.

– Don’t have children.  Children will only slow me down when escaping from city.  Second thought: have children and use as buffer when zombies are chasing me.  Third thought: I’m a horrible person. Re-frame before spiral into self-loathing… okay, children would be useful at survivor camp to convince them to let me in based on guilt factor. Also, my kids can help re-colonize the US.  Still, try not to have kids til we’re sure the outbreak won’t happen.

Her cries will only attract the Undead.

– Learn useful survival skill.  Am rubbish at hard labor tasks… consider learning to cook for large numbers for when I hook up with survivor camp. Is it hard to make one’s own bread?  Learn edible plants a la Katniss in Hunger Games. 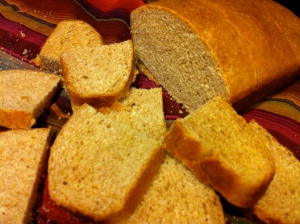 I made this bread once. It was basically edible.

–  Train dog to alert of zombie scent in air. Will be difficult as there are no zombies yet to use for practice. Also, dog not very smart.

She looks like she could kill a zombie right?

–  Get land phone line for apartment and get a non-cordless phone. If the power goes out, phone will still work if connected to ground-line.  Also useful in case of hurricanes, which might be more likely.

You think I’m kidding, but all of these things have legitimately crossed my mind since I read that book.  Many of the surviving characters have these advantages when the virus hits, and I don’t plan to mess around when the world goes mad.  In fact, Max Brooks has helpfully written The Zombie Survival Guide with these and other tips. He’s really thought this through, you guys. If I knew him in real life, I would make sure to bring him lots of baked goods so that he would choose me for his team after the chaos begins.

But then I stop and take a step back and remind myself that none of it is possible anyway and my over-active imagination is a blessing and a curse.

Posted on June 6, 2012, in Real Life and tagged max brooks, to do list, world war z, zombies. Bookmark the permalink. Leave a comment.