My friend N e-mailed me on Friday and proposed that we go strawberry picking and make jelly this weekend.  N considers herself domestic when she adds siracha sauce to her mayonnaise and she only bakes things that come in a tube, so the situation seemed ripe for hilarity.  I agreed without blinking.  My grandfather used to run a farm and worked insane hours so that his children and grandchildren would not have to pick their own food for a living. The irony of picking my own food for recreation is not lost on me. 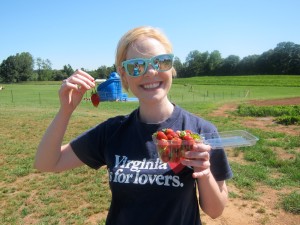 Saturday morning bloomed spectacularly with the kind of blue skies that you usually only see in crayon boxes, and the temperature never rose above a breezy 73 degrees. In short, it was the Holy Grail of Georgia Summer Days. After a few minutes cruising down some rural roads and a few speculations that N might not be the best navigator, we arrived at Warbington Farms.  The staff there advised us it would be the last day of the strawberry season and we might have trouble filling a full gallon pail.  We decided to take our chances. We are, after all, special unicorns.

If you’ve never done it, I highly suggest strawberry picking– it’s extraordinarily satisfying.   You crouch down among these green plants and push leaves to the side and there’s a magic red strawberry, just laying there bright and happy as if waiting for you to find it and take it home.  Every time you swipe aside a tangle of green and find a little splash of red, a little whoosh goes through your heart. It’s like being in sixth grade and seeing your crush from a distance at the mall.  In the end, we were champion pickers and easily filled the small plastic containers given to us by the staff.  N was named MVP for her overflowing containers until her husband pointed out she was also picking the muchy berries and disqualified her.

N’s husband B ambled down a row and commented he could get a job doing this. I bit my tongue, but it wasn’t that hard to repress my natural inclination to snark. When you’re under a wide blue sky and you’re breathing fresh air and you’re doing something productive that isn’t back-breaking with people that you genuinely like, it’s hard to work up to sarcasm.   Like the Grinch, my heart grew three sizes that day. 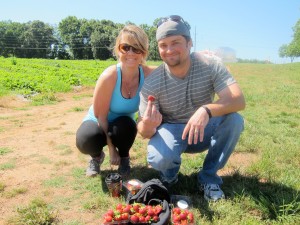 Pleased with our haul, we started back toward the city, but we stumbled across a roadside produce stand.  Still high on sourcing and picking our own fresh food, we threw a bit of business at this nice local guy.   I felt like a character in a tv show or a movie– like the kind of person who lives in the world and not in an air-conditioned, fluorescent-lighted, hermetically sealed box.

We returned to the interstate with the sun roof and windows open and 90s music blasting through the stereo. With our cache of Micheal Pollan-approved produce and the glow of accomplishment about us, we flew home in the kind of bubble of happiness that doesn’t come along often in adulthood.  I don’t know if they actually spray those strawberry fields with ecstasy, but something calm and light seemed to follow us back to Atlanta.

In the end, N chickened out on the jelly, which is really too bad because I promise everyone would have been really amused by that story. I ended up using my strawberries to make a recipe I found a year ago on Smitten Kitchen for Summer Strawberry Cake.  Absolutely delicious- highly suggest it with whipped cream. As I baked it, I fancied myself to be Sarah Michelle Gellar in that otherwise awful movie where she is a chef that bakes her feelings.  I wanted this cake to taste happy, and it did. 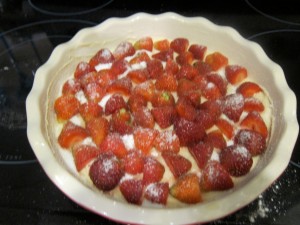 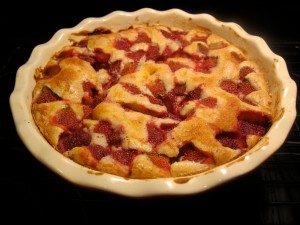 And yes, the strawberries were delicious, which almost seems beside the point, doesn’t it?