Note: If you’re here everyday, you’re probably tired of me saying this. I’m not actually in Germany any more, but I’m writing on delay thanks to some connectivity issues while I was there. Just be cool.

The last day of vacation is always bittersweet. You’re still there, but you can already see this trip getting smaller, further away.

I’ll be honest with you, that last insight is paraphrased slightly from a line in Dawson’s Creek.   That doesn’t make it less true, though.  I mostly remember my last day in Germany in impressions and flashes.

I’m thinking of a dark-paneled biergarten with actual foliage hanging from the ceiling, and I’m thinking of the two much older men sharing our table there who commented that I eat my food like an American because I eat with  a hand in my lap. It sounds dirty when I re-tell it now, which is probably how they meant it at the time but I was too excited about my food to care. 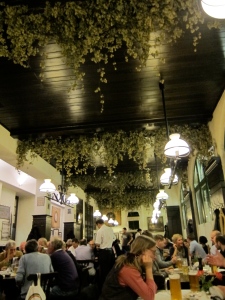 The plants look kind of like alien life forms here, no?

And what food was that?  Spaetzle. This is like mac and cheese on steroids. They put some anemic cucumbers and tomatoes on the side of the plate as if that might some how balance a bowl of cheese and noodles bigger than my face.

Oh, and there are fried onions on top, just in case you thought this wasn’t going to really sit like a brick in your stomach.

I’m also thinking of European breakfasts, which always feel like an event.  Bread, eggs, jelly, cold meats, cheeses, yogurt, sugary black coffee… breakfast feels more like a leisurely stroll through all the best foods.  You can’t leave Europe without having Nutella for breakfast. Unless you are having off-brand organic Nutella. That will also work in a pinch.

It’s worth noting that I have more pictures of my food from this trip than of myself.

And you always think about the things you didn’t do and you think, “oh, next time,” even though you know there probably won’t be a next time because there are so many other place to visit.  Like, I didn’t go to this famously huge biergarten called Hofbrauhaus, which is really touristy but well known. I don’t feel particularly bereft, but it’s still an unturned stone.

I saw it, but I didn’t drink a Radler there. What a waste.

I spent much of my last day shopping for souvenirs with my friend Anne (not pictured, which is a shame because you would like her). Anne towed me around the Old City and enthusiastically pointed at things that I should embrace as quintessentially German.  Naturally, the thing that really excited me was German editions of The Hunger Games. 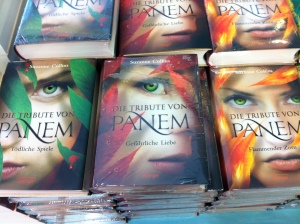 Look! The title has “Panem” in it!

We looked for suitable gifts for my three year old nephew.  Anne encouraged sweet children’s books and wooden toys. I found the perfect thing but I couldn’t fit in my suitcase.  When in doubt, always go with sharks.

Also, this picture is really not flattering. I’m growling, but I look like I’m smiling for the dentist.

I also snuck in one last tourist thing: I watched the glockenspiel.  I informed Anne we would need to watch this at 5 PM in the square and she was bemused. She was kind of like, “You mean you don’t have medieval clocks with mechanical dancers that move in time with chiming bells thanks to meticulous clockwork?”  And I was like, “Amerian, remember?”

Then I met Jenny for dinner at the kind of Italian restaurant where the wait staff just recites the nightly specials for you rather than giving you a menu. It’s like paying someone to eat in their kitchen with a few other strangers. Also, they had an enviable refrigerator. 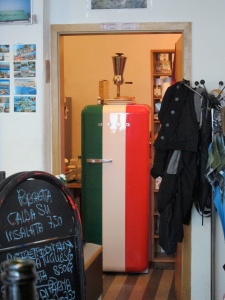 It seems like one should drink beer in one’s last night in Germany, but I’m really just a wino at heart. Prost, Deutschland. It was fun. 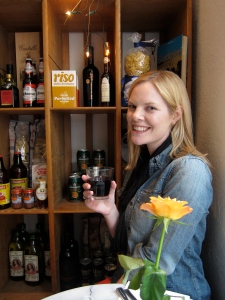 It’s not a plastic cup. It only looks like one.

Even though this is the end of my travel diary, this isn’t the end of my German inspired posts.  We haven’t even scratched the surface with Mad King Ludwig II, and there’s an overflowing bag of candy just begging to be taste tested for blog purposes only. In the meantime, I’m still slightly jetlagged and would like some sleep. Excuse me while I curl up with my furry little German dog.

You know, I didn’t see a single German schnauzer while I was there.

Posted on May 21, 2012, in Travel and tagged food, germany. Bookmark the permalink. Leave a comment.