← The Other Versailles
Last Call in Germany →

Note: I’m technically home. Due to some connectivity issues while in Germany, Im behind in posting. Still catching up.

Near the island that houses Ludwig II’s tribute to Versailles, there is another island that is home to a Benedictine abbey founded in 772. The nuns there have had many years to determine the most important things in life. You’ll be pleased to know that one of those things seems to be beer and liquor because they make their own.  We actually spotted a nun in the wild, habit and all, and I acted like a two year old spotting on a dog on a sidewalk. “Nun!” I squealed as I pointed. Jenny proposed we split up to explore after that. Weird. 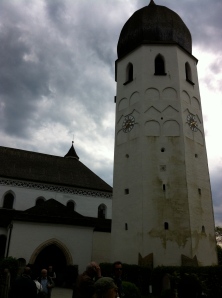 See the storm clouds in the background? This will become a problem very soon.

I’d like to say that after a day spent ogling the finery of a king obsessed with his own wealth that we then spent the afternoon on the nun’s island quietly contemplating the deeper truths of life. This is a lie.  We made an effort to peruse the pretty walking trails, but all roads lead back to biergartens.  At least this biergarten is holy. I think?

This is actually a Radler, which is technically lemon soda and beer, but it’s the best thing Germany has given us. Including BMWs.

(Not pictured: An elderly woman sitting at the table behind us by herself, sipping coffee and happily noshing on a big slice of cake.  She’s my hero.)

Since I’m a good Catholic girl, I felt it was my duty to support the nuns in the best way I knew how.  No, I don’t mean that I got blitzed in the biergarten. Give me some credit.   I bought some of their liquers in their giftshop, of course.  Spoiler alert, Dad, you’re getting a few of these for your liquor cabinet.  And attention to my college friends coming to the beach for Memorial Day: you are going to be submitted to a test taste for the scientific purposes of this blog.  Bring your taste buds and sense of adventure!

I can’t read any of these labels, but one of them appears to say wild berries are involved.

To prove I didn’t just spend the whole afternoon turning water into wine (which Jesus is totally cool with, by the way, Mom), here’s a gallery of the beautiful flowers cultivated on the island. 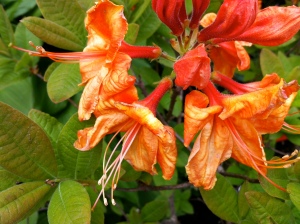 Posted on May 20, 2012, in Travel and tagged alcohol, germany, nuns. Bookmark the permalink. Leave a comment.

← The Other Versailles
Last Call in Germany →