I believed in Santa Claus much longer than appropriate.  A good one or two years beyond most of the kids in my elementary school. I’m not saying that I totally bought into the idea that a fat man squeezed down our chimney and that he flew to every kid in the world one night a year. I wasn’t a total dummy and I definitely recognized my father’s handwriting on the tags on our presents every year. And how come poor kids in Africa didn’t get presents at all? It seemed kind of jerky for Santa to skip them just because they didn’t have chimneys.  No, I knew the story didn’t go quite like they told us.  But I knew there was a Santa Claus and I knew he lived up north and he had something to do with the magic of the season.  Santa was like Queen Elizabeth II and my parents were like the English Prime Minister; Santa was more of a figurehead while my parents did all the dirty work.  The pieces were all there. I just refused to put them together.  Theoretically, reading obsessively should have made me smarter as a kid, but it really just made me especially imaginative.

Then one year, the week before Christmas break during our school lunch, one of the Cool Girls in my class made an offhand command about Santa being make-believe. I don’t remember precisely what she said, but I remember pausing over my Handi-Snacks Cheese and Crackers and thinking, “What? Wait….. NOOOOO.” Like that, the bubble burst. Never mind the countless TV episodes that straight up implied Santa was fake or the lack of photographic evidence or the ridiculous notion of a man wearing a fur coat in the South in December. All it took was one one thoughtless elementary school kid and the veil of childhood slipped off my eyes.   There was no Easter Bunny, no Tooth Fairy, no Santa Claus, and I was probably never going to find a portal to a secret kingdom that would declare me princess either.   Pardon my French, but this was some BULL Shit.

I was pissed. I stormed home and directly asked my mother for the truth. She gave me the “Yes, Virgina, There Is…” speil, and I was briefly mollified before deciding that I just got Kaiser Soze’d…. there was still no Santa Claus. Why wouldn’t she just tell me the truth so I could get on with things? You see, I understood about Santa Claus, but I also still believed my parents were the final word on everything.

I stewed over it for a few days, and a plan started to form. Every year, my older sister and I left a list of questions for Santa Claus. We knew perfectly well that my dad answered the questions, thanks to his distinctive barely legible penmanship. We all played along with the charade, but this year I would put an end to the madness. I would force us into honesty about the holiday. My sister wasn’t hard to convince; she’d been affably playing along with the Santa stuff for years by that point.  She was still feigning belief to keep the present train rolling, but I think she figured the gifts would still show up since the non-believers were still getting them.

We spent every Christmas at my Grandma’s house on a farm in Georgia. To paint the scene for you: Grandma had one of those satellite dishes that you could use to dry your laundry, and we still only got about three watchable channels. It’s the kind of city where people have names like “Bug” and where your closest neighbor may be a mile away.  There’s  no 24-hour convenience  stores or malls or cute boutique gift shops. There are chicken houses, those irrigation systems that look like alien centipedes, and pecan groves.  I planned to use theses facts to my advantage.

After Christmas Vigil mass, we made a show of reading The Polar Express and our mom gave us meaningful looks when the kid talked about the bell ringing for him well into adulthood. Around 11 PM, we finally put out a plate of cookies and milk, and then we sat down to write our yearly list of questions for Santa.  We wanted to trap our parents, force them to shred the list of questions and sigh that we bested them in the stand off over Santa.  We wanted to be right.  And so we lured our faux Claus into a false sense of security by asking the usual puff questions like, “Who’s your favorite reindeer?” and “How many cookies did you eat tonight?”  And then we capped it off with the kicker, “We just read The Polar Express and we would like a sleigh bell from your sleigh to prove that you are real.”

At the time, it seemed like a BOOM MIC DROP moment.  In retrospect, it would have been fairly easy for my dad to answer something like, “Ho, ho, ho, can’t give a bell to everyone who asks!”  Or, “Wish I could leave you one, but we gave up bells years ago so we could use stealth mode.” But as we crawled into bed that night, we were smug and certain of victory. There was no way they could produce a sleigh bell in the middle of the night in the middle of no where. They had no choice but to concede defeat.

The next morning, we raced to the living room and, I kid you not, there was part of an effing harness.  We didn’t get a silver sleigh bell; we got five perfect shiny bells on a smooth leather belt.  The note to Santa now had a post script that read, “Rudolph wanted to give you the whole thing!” 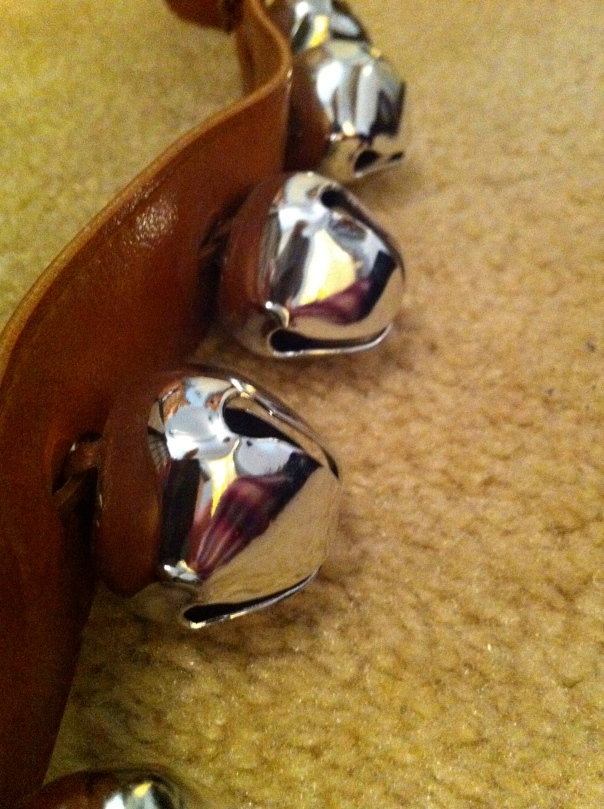 We were dumbfounded. How did they do it? How did they miraculously pull sleigh bells out of the air at midnight in Nowheresville, USA? We knew Santa didn’t leave those bells, but we couldn’t think of a reasonable explanation.   You might argue that a farm might happen to have a harness in storage, but by the time we started visiting there, it wasn’t a livestock farm, and those bells didn’t look like they’d been lying around collecting rust for a few years. Did Grandma randomly keep silver bells in her attic? Did they anticipate the request and have the bells on standby?  Did some miraculous neighbor just happen to have it in his or her garage?

Over twenty years later, and I still don’t know what happened that night.  I’ve asked once or twice, but only half-heartedly.  I don’t really want to know. The story leaves a sparkle in my parents eyes, and I can only assume that they have a great story about that night.  But the real gift that night was not the bells; it was a little crack  in the door that lets magic have a fighting chance.

As adults, we are faced with the cold hard facts of gun control, fiscal cliffs, terrorism, tax season, and countless other reality checks.  I’m not advocating that we ignore hard issues or wallow in ignorance, but I’m hoping we can all still find a little magic in the world. I hope we can still take small delights in unexpected happiness and find ways to surprise each other in magical ways.

So even though I know the weight of science and fact, I choose magic this time. I choose the better story, and I choose the happy ending.  We don’t always get the choice, so I’ll take it where I can.

And yeah, the bells still ring for me.