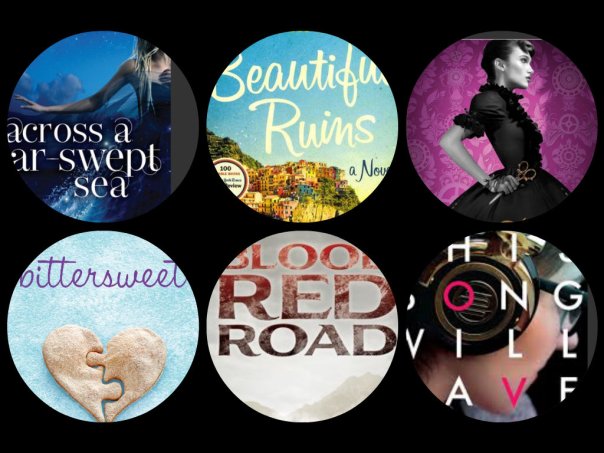 1. Skybreaker, by Kenneth Oppel, finished 12/1/13 Second Matt Cruse book. This time with a treasure lost in space! Sometimes, this series takes on the feel of a serialized British children’s program that one might find on PBS or BBC America.  Or maybe like The Goonies meets steampunk meets Romancing the Stone?

4. Beautiful Ruins, by Jess Walter,  (audiobook), finished 12/14/13   Engrossing story crossing generations and oceans to tell the story of a sickly actress and an Italian hotel owner.  Great voice actor on this one– aces with multiple kinds of accents and soothing to the ear.  There were times when I turned on the audiobook while hanging out in my condo just because I wanted to keep listening to the story. Kind of wish I’d read this one on paper.

5. Blood Red Road, by Moira Young, (audiobook), finished 12/21/13 Yeesh, but this is a dark one. I feel kind of like Stefan from SNL as I describe it. This post apocalyptic YA has everything: cage fights, deluded dictators imitating Louis XIV, a pack of quasi-Amazonian teen girls seeking to liberate a corrupt city, and magical heart’s desire necklaces that really work.  Every time you think the heroine has hit rock bottom, something else really awful happens.   It really is a blood red row to hoe.

6. Across a Star-Swept Sea, by Diana Peterfreund, finished 12/21/13  Sequel to the great For Darkness Shows the Stars. Fun science laced re-telling of The Scarlet Pimpernel.  Dug the world building and the secret spy stuff.

10. Cinder, by Marissa Meyer, (re-read), (audiobook), finished 12/29/13  Just had to snap up this audiobook when I saw it as a travel deal on iTunes.  Listened as prep for the forthcoming third book in the Lunar Chronicles trilogy, Cress. Excellent female narrator on this one!

11. Bittersweet, by Sarah Ockler, finished 12/31/13  Uh– cupcakes, figure skating, a losing boys’ hockey team, a cutesy diner, and snowstorms.  This book is basically a great teen movie.  Upbeat way to finish out the year of reading!

Posted on December 31, 2013, in Uncategorized. Bookmark the permalink. Leave a comment.