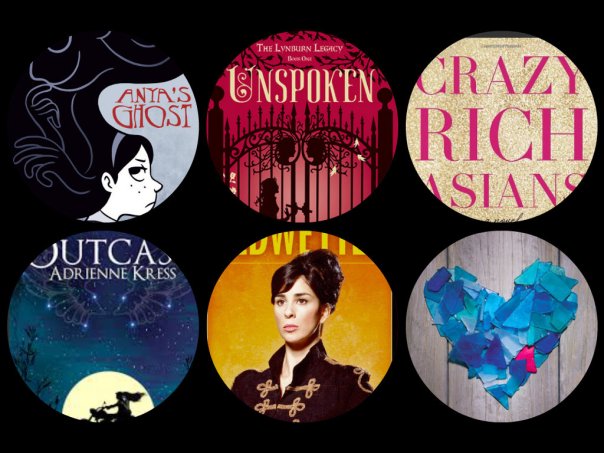 Here’s a wrap up of my July Reading List.

2.  Unspoken, Sarah Reese Brennan, finished 7/5/13 (re-read) I couldn’t help re-reading this one.  I love, love this book, and I heart the sassy and confident protagonist so much. SRB is so good at pointing at literary tropes and then totally subverting them.  The sequel is coming out this fall, and I suggest you get on board with this series post-haste.  It’s billed as “sassy gothic,” and it’s just a great combination of wit and drama.  Tonally like Buffy the Vampire Slayer.

6. Outcast, by Adrienne Kress, finished 7/16/13  Kind of a spin on Teen Angel? It’s total fluff, but I really enjoyed reading this one. I get so mad about so many YA novels where there’s Love At First Sight, and this is a good example of a slower building romance.  And it’s funny! I’m impressed by the play of humor in a storyline that would otherwise be angsty and serious  (Small town invaded by winged creatures, presumably angels, once a year. Family and friends swooped into sky by the visitors, never to return.  Teen girl loses her best friend to the “angels” just when they’re about to FINALLY get together. Girl decides the angels must be stopped.)  And, man, did I love the confident but insecure heroine!  She felt true to life, and I applaud the author writing a romance where the girl is TERRIFIED of getting physical at all because she’s scared she’ll be bad at it and what it will mean for her.   I also really liked Adrienne Kress’ Friday Society, which is about a team of kick-ass girls that come together as a kind of crime-fighting trio in a steampunkish Victorian England.   Why is Adrienne Kress not a bigger deal? She’s writing original, spunky YA lit; and she’s masterful in creating funny feminists protagonists.  People! Get on her! Not literally but in an innocent literary way!

8. Twenty Boy Summer, by Sarah Ockler, finished 7/24/13 I weep for the title of this book. It does the story a total disservice. It sounds like an airy-fairy summer romp story, but it’s really a lovely reflection on grief and moving past it. A great example of a YA novel about female friendships.

10. The One Hundred, by Nina Garcia, finished 7/26/13  Nina Garcia has some nice ideas about the 100 fashion items  we should all own. And she’s totally right– I would be stylish all the time if I had all these things. Affording all of them? A bit of a problem.  But I’m grateful she’s giving me permission to search out a really ridiculous  cocktail ring.   She didn’t mention anything about by hot pink jellies, so I guess I’m good there?

Also, if you’re looking for some good, cheap books this month, there’s some stellar option in the Amazon monthly deals.  The Crown of Embers is second in a series, so start with The Girl of Fire and Thorns, but then race back to get this one before the end of the month.  Enchanted is a fantastic mish-mash of re-told fairy tales, and The Last Dragonslayer is a totally delightful story about the long-suffering teen girl running a boarding home for wizards who is forced to contend with dragons.  If you want something less YA, go snap up Moranthology IMMEDIATELY.  It’s a collection of Caitlin Moran’s columns from The Times, and I don’t know how long it will be so cheap since it’s not on the monthly deals list.  She’s billed as the British answer to Tina Fey. She’s pop culture obsessed, superb at feminist oration, and cheerfully gung ho about life’s oddities.   If you don’t like supporting Amazon, you can find most of the same deals on iBooks, Barnes & Noble.com, and Kobo.com.  Read something great today!

Posted on August 2, 2013, in Books. Bookmark the permalink. Leave a comment.